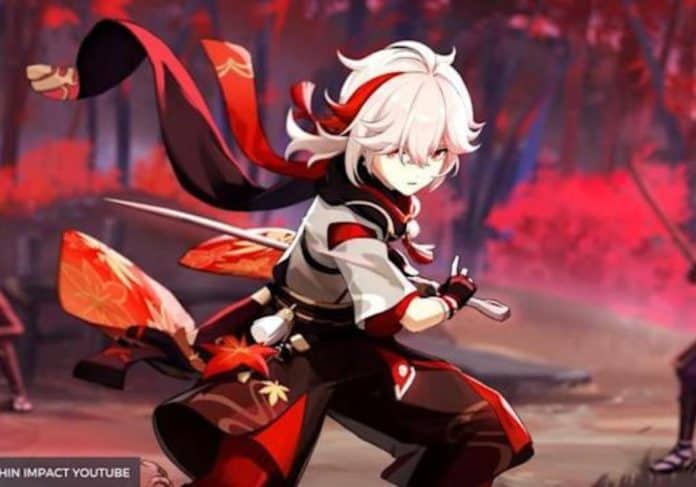 As Kaedehera Kazuha is one of the more versatile in-game characters in Genshin Impact, let us take a look at the five best weapons that are the most ideal for Kaedehera Kazuha.

In Genshin Impact, Kazuha’s finest weapon should be adaptable like him. Although Kazuha is capable of several duties, his job is determined by his physique. The most important part of any build is choosing the right weapon. Let us take a look at the top 5 weapons.

The cursed blade has a 510 base attack power and an R5 effect of a Normal, Charged, or Plunging Attack hits an opponent, it will whip up a Hewing Gale, dealing AoE DMG equal to 360% of ATK and increasing ATK by 30% for 8s. This effect can be triggered once every 8s.

The inclusion of Cursed Blade in Genshin Impact’s sword lineup is certainly appreciated. The blade comes with all the usual bonuses that a weapon’s user receives, as well as a fantastic passive that greatly increases the damage of Kazuha’s Plunges.

This sword has a base attack power of 565 and an R5 effect which after defeating an opponent, causes attack power be increased by 24% for 30s. This effect has a maximum of 3 stacks, and the duration of each stack is independent of the others.

The Blackcliff Longsword is a difficult weapon to get, but it can improve Kazuha’s performance as the main DPS. Any character that wishes to do the most damage while on the field will benefit from having an ATK boost of over 70%, and Blackcliff sword offers just that.

Also read: Who are the 11 Fatui Harbingers in Genshin Impact?

This sword has a base attack power of 608 and its R5 effect causes the CRIT Rate to increase by 4%. Gains Skypiercing Might upon using Elemental Burst. Increases Movement SPD by 10%, increases ATK SPD by 10%, and Normal and Charged hits deal additional DMG equal to 20% of ATK. Skypiercing Might lasts for 12s.

Even though Skyward Blade has Energy Recharge as a secondary stat, it is still ranked among the best swords in Genshin Impact. As a Sub-DPS and Main DPS, the weapon may force Kazuha to deal more DMG, but not as much damage as a Support.

The sacrificial sword has a 454 Base ATK and after dealing damage to an opponent with an Elemental Skill, the R5 skill has an 80% chance to end its own CD. But it can only occur once every 16s.

Kazuha is one of the support characters in Genshin Impact who excels with sacrificial weapons. In addition to being able to cast his Elemental Skill once more and earn additional Elemental particles, Kazuha will also be able to Crowd Control the adversaries and launch another Plunge assault on them.

The Iron Sting has a 510 Base ATK and deals elemental DMG increasing all DMG by 12% for 6s. Max 2 stacks. But it can only occur once every 1s.

For Kazuha, the Iron Sting is a fantastic F2P option. His skills already have a significant increase in DMG of 24 percent, and Iron Sting adds much more. The 165 Elemental Mastery acquired by the forgeable Genshin Impact weapon will be converted by Kazuha into even greater Elemental DMG. Iron Sting’s strong Base Stats enable Kazuha to play the Sub-DPS role while carrying out his Supportive duties.