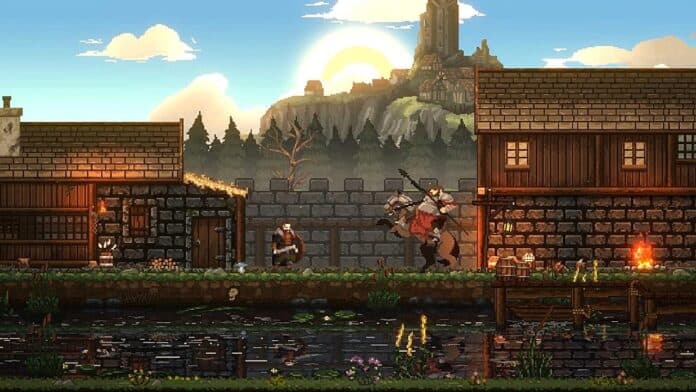 Pixel Chest Games, the developers of Sons of Valhalla, released the official announcement trailer for the game, which is coming to Steam later this year.

When it comes to 2D pixel games, most players associate with the popular release of Terraria a few years back. However, there is a new pixel game coming out in the form of Sons of Valhalla, and it definitely shows itself off in the trailer.

Let’s take a look at what we can expect to see in this upcoming Viking-type game.

The game is set in the Viking era in which the protagonist’s father has been killed and his beloved has been abducted by the enemy. The player who controls the protagonist has to rescue her by any means possible even if it means hacking and slashing through everyone in England.

The world itself looks gorgeous. Despite the game having 2D pixel art, the lighting looks stunning. The day and night cycles capture the countryside and nature beautifully, not to mention how immensely detailed the thunderstorms and the other weather changes have been made.

What defines a Viking? If you think the answer to that is all-out violence involving flamming catapults and war hammers, then you thought right.

Sons of Valhalla is an action game which includes Viking combat, base-building, strategy, and RPG elements as well. The combat system is well designed and includes dodge-rolling, various attack types and move sets, along with weapon and skill up-gradation systems.

Once the player gets some loyal followers from a village, they can lead them on a bloody quest and raid enemy towns, which will provide the resources to upgrade your main base.

Like the player, even the enemies can build and use siege engines and flaming arrows to destroy barricades and gates to invade strongholds.

The player can however take a break from the combat and explore the countryside and admire its beauty.

Sons of Valhalla looks to be a promising new addition to the pixel-art franchise of games, and judging from the trailer, it most certainly looks to provide for some great gameplay.